Being able to stay under water for much longer, we could take samples of sand from the deeper parts, which were located further out into the bay. Also, we were able to sample the pore water in the sediment itself, without removing it and bringing it to the lab, so as to get snapshots of the chemistry in the sand in its natural setting. The sand is extracted with tubes of ca. 30 cm long, so-called “cores”. What we do with those cores is push out the sand, and slice it at predetermined, regular intervals. Each slice is weighed and dried and later analysed. In this way we obtain a depth profile of different locations in the bay.

While diving the deeper parts of the bay, we collected thumb-sized fragments of live coral. Why would we take coral, you ask ? Well, as the olivine dissolves, it releases both silicate and metals into the seawater. Most of the metals are either magnesium or iron, http://www.youtube.com/watch?v=wm790hF6Wogwhich are both in ample supply in natural seawater. Part of the saltiness of seawater is actually caused by magnesium salts. No, what is of interest to us researchers is nickel. Nickel occurs in very low concentrations in olivine. However, if you have an entire olivine beach, the amount of nickel leaching out of the olivine sand is expected to be considerable. For many organisms, including ourselves, nickel is of vital importance to certain physiological processes. However, as with many metals, it tends to become toxic in higher concentrations. So, the main reason we sampled corals in Mahana Bay is to investigate whether we can find traces of nickel (coming from the olivine) in the corals. We not only collected corals, but also other organisms that spend their entire life living in close vicinity of dissolving olivine and may even ingest it on a regular basis, like sea urchins and sea snails. Mind you, this would just tell us something about the incorporation of dissolved metals from the olivine into the tissues of living organisms. Whether that is bad thing in itself remains to be seen. 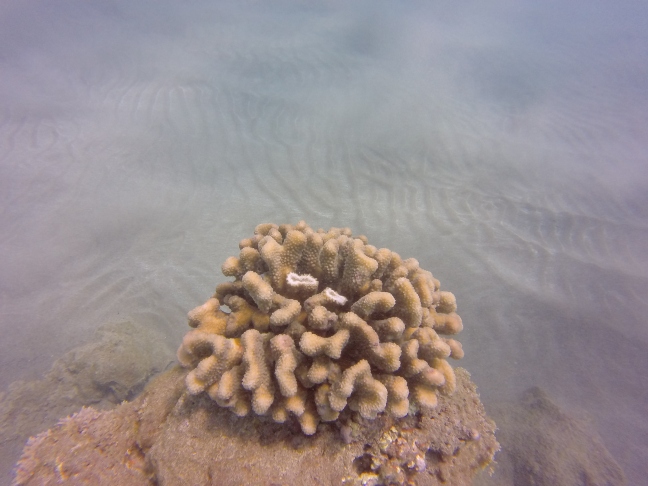 To be able to distinguish whether the metals may be accumulating in different parts of the coral, we need to separate the soft coral tissue from the hard calcareous skeleton. This can be done by using pressurised air, and literally blowing the soft polyps off the hard skeleton. It does sound a bit gruesome, and it actually is…but it is the only way. Like this, we get a really clean calcareous skeleton and a gooey substance which can be analysed separately, enabling us to say whether corals store the metals in their hard skeleton or in the soft body tissue. Because both the skeleton and the soft tissue each serve as food for different animals higher up in the food chain, stronger accumulation of metals in either of them, may affect different parts of the ecosystem.