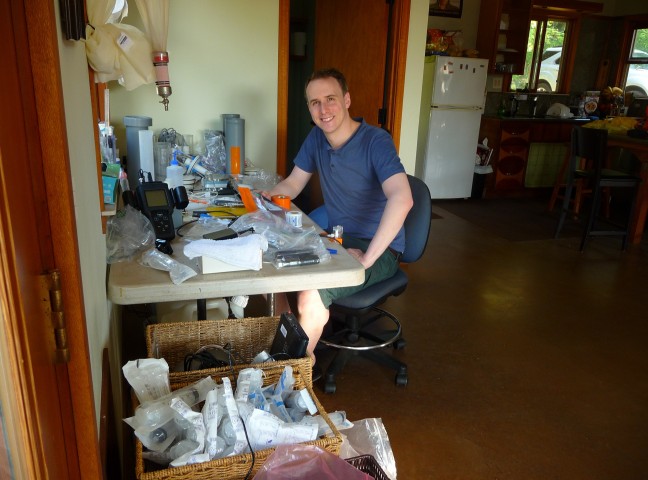 After a couple of intense first days of sampling Mahana bay, we needed to hold our horses somewhat and allow some time to process the material we had gathered. As you can see at the top of this post, Phil is very busy analysing samples in our holiday home laboratory. It is funny, starting so enthusiastically, one always forgets these simple truths of fieldwork life: you have to empty the bottles you use, lest you can take more samples. Until that point, there is no going on.

One of the things we needed to find out, is what compounds are released by the olivine. Recall that the olivine on Mahana / Papakolea beach is thought to take up CO2 while it (slowly) dissolves in the seawater. The olivine itself is what mineralogists would call quite “pure”. That is, it is made up of only a few different elements, and apart from its main constituents, it does not contain many extra elements, sometimes referred to as “contaminations”. Typical (forsteritic) olivine contains three main compounds: mostly magnesium (Mg), some iron (Fe) and lots of silicate (SiO4). “Normal” sand, which is found on your “average” beach is made up of mainly silicium dioxide (SiO2). There are some “extra” metals, that occur in the olivine mineral, but only in very low concentrations. Some of these metals normally set off a lot of alarm bells, like chromium and nickel, but luckily these occur only in very low concentrations. Nonetheless, when olivine dissolves, all those mentioned compounds, including the metals, are supposed to be released from its solid form and go into solution. At the same time, the dissolving olivine should provoke the uptake of CO2 by the seawater. Exactly this is one of the reasons why we want to measure the concentration of dissolved compounds and CO2 in the seawater.

In the picture above, you see me (Francesc Montserrat) preparing to take samples of the seawater we collected from both the surface and along the bottom of the bay, while snorkelling. These samples will be preserved and later analysed for dissolved CO2. 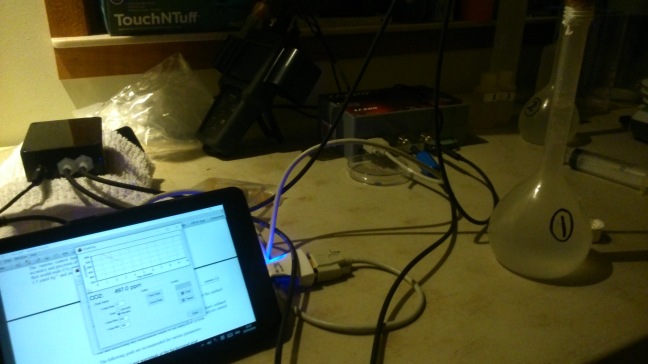 As the beach sand contains a lot of olivine, the real chemistry is of course happening in the water that fills the space between the sand grains, aptly called the pore water. Because pore water is not as diluted as the constantly moving seawater on top of the sediment, it typically has higher concentrations of the dissolved compounds we were after. One way to analyse the dissolved compounds in pore water, is extract a column of sand from its original place, take it to the laboratory and and suck out the water in between the sand. In the picture below, you can see a PVC cylinder, containing sand from Mahana beach. In the wall of this cylinder, we drilled some holes at fixed intervals. In the holes, we stuck little flexible tubes, which are coated with a sort of filter. These filters, called “rhizon samplers”, are connected with little tubes to syringes with which we suck out the pore water. The filter coating on the rhizon samplers filters the pore water we are sampling, and so provides a snapshot of the chemistry at a particular depth in the sediment. 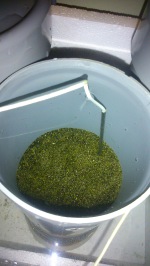